We didn’t plan to go to Guernsey. We wanted to visit the Isles of Scilly to explore wildlife and enjoy the Taste of Scilly food festival in what we hoped would be settled September sunshine.

Tropical Storm Helene put paid to that. By the day before we were due to set sail, the remains of this hurricane looked likely to miss Scilly but leave five metres of swell. So we decided to go in the other direction and hop among the Channel Islands.

A fresh southwesterly breeze gave us a fast crossing from Plymouth and at one point it looked as if we’d make St Peter Port in the early hours of the morning. However, the Coastguard warned that the Platte Fougere lighthouse marking the northern approach to St Peter Port wasn’t working reliably, and I thought we’d better turn south and come round the other side of the island.

The tide had other ideas. It swept us sideways so strongly that we couldn’t make any progress southwards at all. We spent two hours sailing back along exactly the track we had come. I calculated in the end that we might as well go back to the first plan and approach St Peter Port from the north. We’d used up so much time that we would now be arriving in daylight, so the unreliable lighthouse wouldn’t matter.

It took all morning even with the engine on to push against the tide that by then was sweeping up the Little Russell channel and reach St Peter Port. We berthed in an almost empty harbour: the sailing season seemed to have ended suddenly in the Channel Islands.

Maybe the weather forecast had something to do with it. We’d missed Tropical Storm Helene but two more named storms, Bronagh and Callum, were driving in from the Atlantic. Even sheltered in the crook of Brittany, we were in for strong winds. After a short discussion, we took the harbourmaster’s offer of four nights berthing for the price of three and decided to do any island-hopping on a ferry rather than sail ourselves. As it turned out, we had to wait two more nights for the aftermath of Storm Callum to die down and even then, had a rough and windy passage back to Plymouth.

There are worse places to be stuck than Guernsey, though. The island is beautiful and soaked in a unique history which most people in Britain hardly know. I’d never understood the odd legal status of the Channel Islands: they are the last remnant of William the Conqueror’s Duchy of Normandy, loyal to the Crown but never integrated into the United Kingdom and so never part of the European Union. In the 1970s, when the UK joined the EU and we started to eat Dutch tomatoes subsidised by the Common Agricultural Policy, the tomato industry which had been a mainstay of the Guernsey economy died in a decade. But Guernsey and Jersey were able to grow a financial services industry beyond the reach of UK and EU regulation.

Dark memories of the Second World War crop up all over Guernsey. The island is within sight of France and along with the other Channel Islands, was occupied by Nazi German troops within days of the fall of France in 1940. I was unsettled walking into the Tourist Information Office to see a large photograph of German soldiers in coal-scuttle helmets marching in front of Lloyds Bank.

Hitler saw great symbolic value in occupying what he saw, slightly inaccurately, as British territory. He imagined the British would do anything to get the islands back and poured in thousands of troops to defend them and thousands of workers, many of them slaves, to build concrete fortifications. The British government, though, was realistic. It saw no chance of recovering the islands without terrible loss of life and simply ignored them until after the Allies had retaken Normandy.

The German underground military hospital and ammunition store on Guernsey remains as concrete proof of Hitler’s futile obsession. Dug out of solid rock at the cost of many deaths among slave workers, the hospital and store were always damp, so ammunition had to be covered in tarpaulins. The 800-bed hospital was used for only a few weeks, when some of the German casualties from the Allied invasion of Normandy were brought here. When it became clear that the Allies were not going to attack the Channel Islands, the wounded men were brought back into the sunlight and treated in normal hospitals.

When the weather forecast kept us in Guernsey for an extra two days, I went in search of my own local history. My aunt Marie was very proud to come from Guernsey, although she was born in Essex just after the First World War and I’m not sure how much she ever lived on the island. I recently inherited a bible from her which belonged to her grandfather, and a happy morning in the Priaulx Library identified the farmhouse where he had lived in St Peters in the Wood. The oldest part of the building dates back to 1450 and the gable is pierced as a dovecote. The main farmhouse dates from the 1860s. 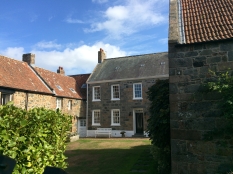 The 1450 part of the building is pierced as a dovecote

Beating into a northerly Force 6 gusting to Force 7 on the way back to Plymouth made for heavy work on the tiller. With two reefs in the main but both headsails up, Guiding Star didn’t balance. We do have a storm jib but I’ve never had it out of the bag and was hesitant to experiment now: a good lesson would have been to try it out on the pontoon on one of the days we were stuck in harbour.

We left by the northern entrance to the Little Russell and the last of the east-going tide pushed us dangerously close to the rocks north of the island of Herm. When the tide turned and we headed north, the leeway pushing us west was so great I thought we’d end up in Falmouth rather than Plymouth. The disturbed sea made us all feel sick and the cabin reeked of paraffin. It was only after we arrived in Plymouth that I realised the cabin lamp had been swinging and jerking so wildly that it had been oozing enough oil to make the cabin uninhabitable.

By next morning, though, we were sailing gently under a cloudless sky within sight of Start Point, spotting dolphins. Soon, we had to put the engine on to move at all across the glassy sea.

Still several miles from land, we saw what we thought was a small bird darting round the boat. It looked too small to be a seabird and had an odd, fluttering flight. We realised it was a bat, exhausted and looking for a perch. It tried to grab the leech of the mainsail and circled the mizzen where our red ensign had wrapped itself round the top of the mast in the wind. After several attempts, the bat clung onto the flag and crawled inside its folds. We knew how it felt. 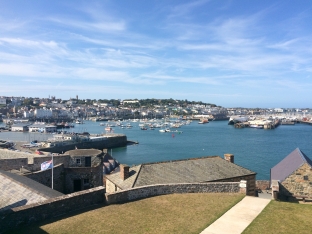 until the edge of Storm Callum arrived

Up to eight metres of tide in St Peter Port

Four months into the Occupation, the paper had little it could say